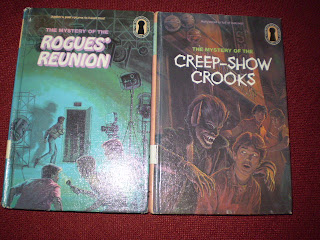 There are varying opinions on library bindings among collectors. Because so often they are circulated, many find them to be of little to no value, therefore not worth collecting. For others, these library bindings represent the books the way they are remembered among fans. Libraries were sometimes the source of introduction to a series, despite the fact that many libraries refused to carry series books. When they were found in a library, a child might check out a certain title over and over. Nostalgia draws these buyers back to library binding books. In some cases, however, library bindings are the only way to find certain titles in a series. Thus the emphasis for collectors who want a complete collection that looks the same is drawn to these particular copies. The Three Investigators series is one such series.

The Three Investigators series was published by Random House beginning in the 1960s. Trade editions were issued, and were fairly common to find in discount stores as well as book stores throughout the 1960s and 70s. These books however have a common flaw inherent in ma

ny copies. The text box seems to crack and break away over time, creating a problem for keeping good copies of the books. Random House had library bindings created under the Gibraltar Library Bindings to create more durable books for the heavy use that a library can see. GLB books are fairly easy to identify. There are no titles listed on the back of these editions, and at the bottom, one usually sees the logo of an elephant, pictured here. One will find the illustrated endpapers reversed fr 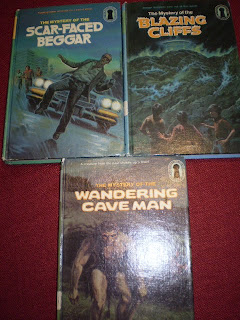 om the trade editions.
For a collector seeking all 43 titles of this series in hardback, one runs into a problem. Numbers 1-28 were printed in hardcover, but beginning with number 29, The Mystery of the Sinister Scarecrow, the books were published in paperback. Hardcovers continued to only be issued in GLB bindings, which were primarily marketed to libraries. These books are highly sought after by collectors, and normally will sell for anywhere of 15.00 to 50.00 each on line. Uncirculated copies often sell for 100.00 or more, especially if they appear to be never read and in mint condition. These books allow a collector to complete their collection with uniform books on the shelf. GLB books are durable, and are really better than the earlier trade editions. I have noticed that some of my books, which are sitting on the shelf, are starting to crack and separate. I may have to upgrade my collection, which has many firsts, because of the text block issues.
I have posted pictures of some of my GLB books from my collection. I was fortunate to acquire most in library sales. It is indeed a shame that the books are no longer available to today's young readers, but I feel confident that they will return at some point in time. It's a great series, and fun to collect!
More on library bindings to come...
Posted by Jack C at 11:33 AM

Exploring the hobby of collecting and selling children's series books. Book series, identifying printings, and specific titles are all explored here! From Oz to Nancy Drew and the Hardy Boys, the wonderful world of series book collecting is highlighted!

Jack C
Fenwick Island, Delaware
I've been collecting children's series books from Nancy Drew to Ken Holt over the past ten years. I am a 10th grade English teacher in real life!